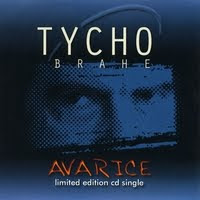 Avarice (Special K Stompy Edit) has just been uploaded to Youtube, accompanied by graphics created in Blender by Francis Tohill, subtly re-edited by yours truly. These graphics were originally created as the background projection for the Don't Feel That Way video, but they work rather nicely against the Special K mix. Favourite parts here at Tycho Central are Francis' mesmerising "roller coaster in hell", derived from the Atlantic trident logo, and the bizarre "bignose" character - are you looking at the front, or the back...? Awesome work Francis!

View the video by clicking on the picture or here: http://www.youtube.com/watch?v=zkgM6YGHDCg

The Special K Stompy mixes were an exercise in remixing a Tycho song in the style of some of the early noughties remixers such as Felix Da Housecat, and Digweed & Muir. Plus it was always a personal twisted ambition of mine to create a listenable remix that ran to 10 minutes - the full Avarice Special K Stompy Club Mix ran to 10:37 and the TB303 positively screams at the end of the track. The instrumental beds for the mixes were recorded "live" in the studio, with all the synths, samplers and drum machines running from a Cubase sequencer, with manual audio mixing and synth manipulation on the fly. Precarious stuff! Vocals were dubbed on later.

The Avarice CD single sold out of physical copies long ago, however it remains available in download format on CD Baby, where you can grab the entire 4 track single for a measly US$3.00, or on iTunes for a bit more. The single features the Delos XX50 Rejoined Mix, the Avarice Special K Stompy Edit, and Avarice demo (recorded live to tape in the Tycho Room) which were all exclusive to the single release, whilst the full Club Mix also resurfaced later as a bonus track on the Atlantic album.

Stay tuned for some interesting developments in the very near future...