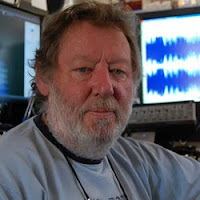 In his earlier days Martin famously worked as an engineer on records for Shirley Bassey, David Essex, Fleetwood Mac and even T-Rex. But it was in the late '70s/ early '80s that he truly made his mark upon the world. Amongst his producer credits are records by the Buzzcocks/ Pete Shelley, Stranglers, Generation X (which spawned Billy Idol), XTC, Altered Images, The Associates, The Go-Go's, some early Joy Division, Australia's Do Re Mi...and of course, The Human League, including the album 'Dare', and it's groundbreaking instrumental remix companion album 'Love and Dancing'.

Remove either of those releases from the equation and I would never have been so inspired by music to become an active participant. Dare contained great songs, but the production which sent it through the roof to achieve sales of around 20 million copies was 100% Rushent.

Unfortunately I never got to meet Martin, but did have some communication with him. Note that on our Transatlantic album, the opening track is "It's Not Enough (Extended Martinesque Mix)". The remix style was based on Martin's pioneering dub mix work in the early '80s, and named somewhat obtusely in his honour (with Martin's approval). From Martin's emails (which I still have of course): "Sounds really good you guys have a severe 80's head on - v nice indeed will spread the word. stay in touch, martin." And, "I'm very flattered and u can call it whatever u like including martinwhatever so long as u are happy it wont damage sales !!"

And, I did indeed stay in touch from time to time, and he seemed to be a lovely guy, in addition to being a true pioneering genius.