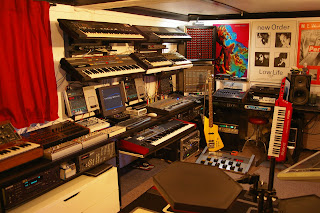 A quick update on what's happening in Tycho land...from the outside it probably looks like nothing's going on, but...

A couple of weeks ago we booked a short session in a local studio, and recorded a handful of tracks live! These will be released as a free downloadable EP in the near future. The recordings are quite raw, and a bit rough around the edges, and that was the point - to capture the live feel of the band. The working title of this EP is "What You Paid For". Think about it ;-)

The next studio album seems to be taking forever...and that would be because it is! Progress is slow due to time constraints, but the quality of the productions completed so far is excellent. There's actually well over an album's worth of recordings in the pipeline, it may come down to selecting songs which work best together and releasing the others separately.

A great deal of time was spent earlier this year refurbishing and rewiring the Tycho Room, now renamed "Tycho Central". With the transformation now complete, a photographic project has begun to document the studio contents and update the Tycho "Gear List" page on the website into a more visual interactive experience. There may even be a few demos of the vintage gear linked from the page to Youtube - it will be nice to share some info on this quirky old equipment with you all.

Amongst all of this I've also been making use of the gear at Tycho Central and recorded a few new demos. One of these is titled "Only Rock 'n' Roll" and is one of the strongest songs I've written - it should make it onto the next album.

There's also talk of a gig in Melbourne early next year with a couple of other great Australian electronic acts - but more on that later...