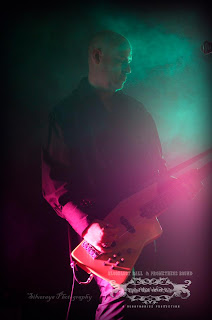 Two weeks ago saw the first public Tycho gig for over two years when we headlined the Bloodlust Ball/ Prometheus Bound event at St Paul’s Tavern – and after the horrendous start to the year I have to say it was a fantastic feeling to be back on a stage. We played this show as a two piece, the first time Georgina and I have done so since around 1998, which meant we could do a few different things that don’t comfortably fit the four piece format. This included resurrecting a late ‘90s cover version of Blue Monday, and performing our remixed versio 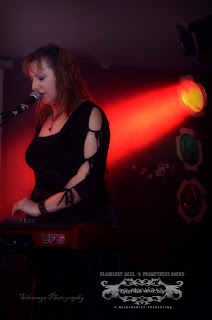 n of Real Life’s “Imperfection”, I even got a turn on the keytar for that one. We also unveiled a brand new song, “Sex Rocket”, complete with live vocodered vocals and cowbells, which went off!

The event itself was fantastic, a great night which captured the flavour of the Bloodlust Ball events of the ‘90s, which we played at in ‘97 and ‘98. There were some great photos taken of the night by Silveraya Photography, including the photos of Georgina and myself that you can see here (used with permission). Check out other photos from Bloodlust on Silveraya’s Facebook page, and also take a look at the Silveraya Photography website, I love some of the portrait work there, especially the green goth girl!

As mentioned previously, after 8 years Andy has decided to leave Tycho. He has been a huge contributor to the band, not only in the live arena, but also as a songwriter, giving us such great songs as Don’t Feel That Way (the video of which got us our first TV airplay on the ABC’s Rage), Metropolis, Loveless, and Another Useless Photograph. Andy’s company and insane sense of humour will be missed within the band, however it’s an amicable departure, and I’m sure we’ll see him at a Tycho gig sometime. Andy also went above and beyond through January’s flood crisis, and the aftermath, not only helping us evacuate through the night of January 12, but also assisting with demolition of the house (he’s better with a keytar than with an angle grinder BTW) and with moving furniture and belongings. Andy – thanks for everything mate, the story of Tycho is richer from your outstanding contributions.

Being in Tycho Brahe over the last 8 years has been a wonderful time for me and it has been a lot of fun. It has been with a heavy heart that I made the decision that I would bow out. I know I'll never be in a band as tight or as great sounding. I leave with some really good memories of the last 8 years…I will miss the interstate tours as they were very enjoyable and it is nice to leave a few well produced tunes on the landscape to become part of Tycho folklore.

I wish you all the best for the future and I honestly wish Tycho absolute success (whatever that is these days)…I might even get to the odd gig to get a punters view of the band. All the best. Andrew Walls (ex-keytarist) 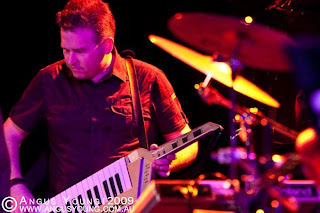