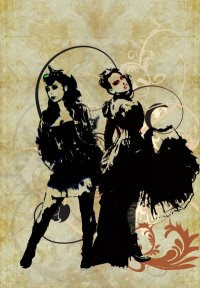 Well folks it has been a while – a very long while - but this Saturday 27th August we are playing a set at St Paul’s Tavern as part of the event “Bloodlust Ball 2011 + Prometheus Bound”. Tycho Central is still only partially reconstructed after the January flood disaster, so we’re operating under some duress, hence the late notice…we weren’t 100% convinced that we’d actually be able to pull this one together!

It will be a reduced lineup for this show, as drummer Stephen has a previous commitment to be onstage with Felinedown in Sydney at around the same time. Also, earlier this year, Andy decided that he’d had enough of our wild rock’n’roll excesses, and hung up his keytar. We will be posting a proper farewell statement for Andy on the website in the near future.

So this Saturday, it’s back to how it all began – ye olde 2 piece lineup, Ken & Georgina, which I don’t think we’ve done since 1998! Laptop karaoke…? Hmmm, maybe. Nevertheless, the 2 piece format affords us the chance to do a few different things, which we may never do ever again, especially as a full 4 piece band. Could be interesting…